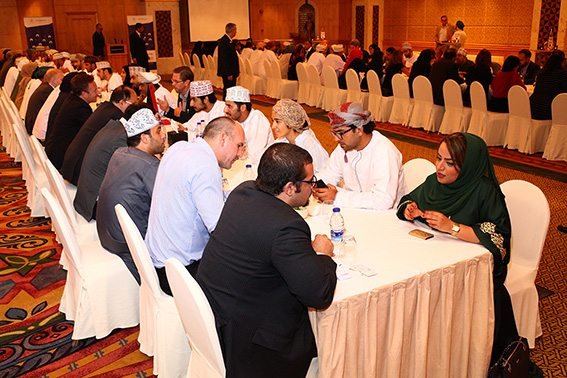 Muscat, May 1st 2016 – Encouraging greater connectivity in the Sultanate’s burgeoning entrepreneurial community, the Oman American Business Centre (OABC) is set to organize its 5th Speed Networking event, in cooperation with the Turkish Airlines, at the Grand Hyatt Muscat on May 11th 2016. The Speed Networking event has been designed to help accelerate business contacts among participants. With more than 100 people expected to attend, the networking sessions will serve as a platform for established, growing and new businesses to interact and build long-lasting partnerships.

Ali Daud, President of the OABC, said, “This year’s Speed Networking event builds on the success and remarkable feedback we received in 2015. Over the years, our event has grown to become the best place businesses in Oman can harness professional networking as a tool for growth and expansion. We initially started these networking sessions after recognizing the difficulty entrepreneurs had in developing their businesses and connecting with like-minded people who could help. Two years on from our first Speed Networking, we have seen the entrepreneurial spirit and connectivity continue to grow. In its fifth edition, once again, participants can expect to make real connections that will foster further growth and development for their businesses.”

Rumaitha Al Busaidi, Moderator for the event, commented, “Based on a face-to-face, professional networking model the entire Speed Networking process is quick, easy and designed to allow attendees to network with as many people as possible. Participants will be split into two groups, sat in pairs facing one another and given two minutes to talk and get to know each other before moving to the next person. Within one-hour of the speed rotation sessions, participants will have met 30-40 guests. Afterwards, an hour-long reception will follow, giving everyone the chance to reconnect with anyone who particularly grabbed their attention and get to know them and their business in more detail.”

Ihsan Gorgun, Turkish Airlines Regional Marketing Manager of Oman, said, “We recognize Speed Networking with OABC membership as a great business opportunity and will be happy to share with the participants, information about Turkish Airlines flights to US and corporate club benefits”.
Held annually, the OABC’s Speed Networking event is open to the public and all interested companies. Welcoming businesses of all types and sizes, the OABC requires all prospective attendees to contact oabc@oabcoman.org for inquiries and registrations.

The Oman American Business Centre was formed to foster the development of commercial activity between the United States of America and the Sultanate of Oman. The center invites businesses in the Sultanate to join and gain a unique opportunity to exchange knowledge, share best practices, and learn key business strategies.