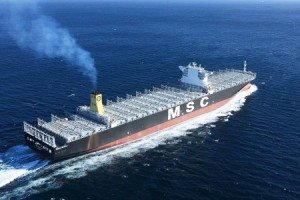 Port of Salalah has announced that the MSC London will mark the historic arrival of the largest container ship to call in Oman when the ship is expected to arrive in Salalah on Friday, 8 August, 2014.

Longer than the Eiffel Tower at 399 meters in length, the MSC London is so far the largest ship owned by the Mediterranean Shipping Company (MSC) and the first in a series of six 16,652 Twenty Foot Equivalent Unit (TEU) ships to join the 474+ vessel fleet.

“The arrival of the MSC London is more than a record event for us,” said David Gledhill, CEO at Port of Salalah, “as not only does this illustrate Salalah’s capability to handle vessels of this class, moreover, it reflects the sound partnership and confidence MSC has in the Port of Salalah to handle the company’s largest container ship efficiently.”

Port of Salalah will service the MSC London as well as an additional MSC vessel with a capacity of 10,000 TEU in simultaneous container operations. Up to 3000 TEUs will be loaded onto the MSC London for transshipment as the vessel is underway from Singapore to the Black Sea.

“Though shipping is a cyclical industry and no day is ever the same, an average of 9,000 moves throughout the 24 hour cycle is the norm here at the Port of Salalah, a testament to Oman’s investment in this state-of-the-art container terminal,” adds Gledhill.

Port of Salalah, Oman’s largest container terminal, is the only port in Oman that provides direct weekly connections to markets in Far East, Europe and the US East Coast, as well as to emerging economies in Africa including Kenya, Tanzania and Somalia, and the Indian Sub-continent, with multiple sailing to these locations each week.